This map is a hand drawn copy of the sketch map from Gillian Tindall’s book, The Fields Beneath. It is not a historic map.

It shows the original site of Kentish Town which was quite a long way South of the present location. It was by Old St Pancras Church which is at the back of Kings Cross Railway Station.

The River Fleet flooded so much it became almost uninhabitable and people seem to have drifted North, up the river to drier land where we are now.

Mother Redcap is where Camden Town is now. There is still a pub there by that name.

The Castle Pub on the corner of Castle Road and the High Street was famous as the place Nelson allegedly stayed. It went through some grievous changes at one point being the horrible Verge Pub. Ringleys, the estate agents, seem to have bought it and at one point removed all architectural features. After a vocal local campaign they had to reinstate and rehabilitate it so it now handsome again – albeit with a pretty alien modern penthouse.

In our area, Anglers Lane is shown and the River Fleet. The ‘Chapel of Ease’ was built on what looks like the site of the Claudius Ash factory. This was to allow people to attend church without having to go all the way back to St Pancras.

More research is needed on this ‘pre-history’ of our area. 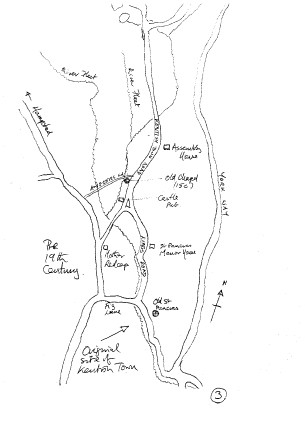