There are two historic Ordnance Survey Maps that are out of copyright and may therefore be legally copied.

The 1870 map is a wonderful map with very informative detail which rewards enlarging on the photocopier. (Or just press control and turn the wheel on your mouse away from you …  as you very well knew..) It shows our area completed in the north east but slightly unfinished in the south west. Grafton has still not been completed and there is still nursery land shown there. Ryland Road has not been built over the garden of the Aged Governesses Asylum.   We have a really good article on this subject by Pam Taylor from Ryland Rd:  Inkerman Area Residents Association Ltd History of the Gates by Pamela Taylor (inkermanresidents.org.uk)

Cathcart street is showing as not going through to Mansfield Place, as Holmes Road is still called. The swimming baths are not built nor is the Police Station. The Coal depot is very noticeable where the Camden Works Depot is now. The Tooth Manufactory is shown in Angler Lane. We have a special booklet compiled by Claudius Ash, the first false teeth factory in Europe, now on the website – another great article from Ryland Road’s Sara. Inkerman Area Residents Association Ltd Pearly whites – false teeth in Anglers Lane – from our Special History Correspondent – Sara (13) (inkermanresidents.org.uk)

At the bottom of Anglers Lane are some fine houses with large gardens and a Chapel. 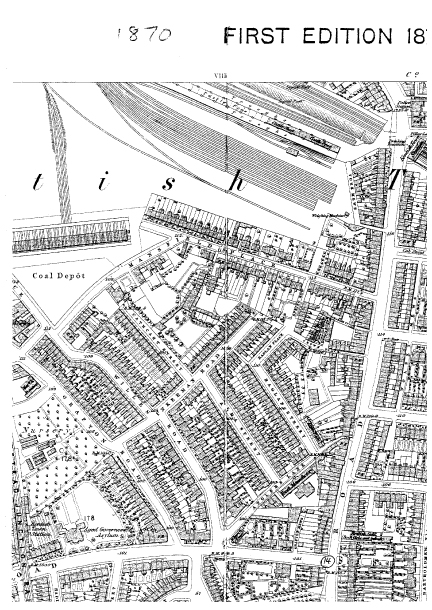 The 1916 map shows the Police Station in what is now called Holmes Road. The Royal Mail Yard and the London General Omnibus Company’s Depot off Cathcart Street in what had been open land.

The School was built on Holmes Road – we have a booklet made by them giving the history. It was later Kingsway Princeton adult education and is now The French School – Collège Français Bilingue de Londres Ltd   http://www.cfbl.org.uk/en

The Nursery to the West of Grafton is now covered with houses and the Pianoforte Works and Ryland has been built across the garden of the Governesses Asylum which is now shown as School – at that time Camden School for Girls. The houses at the end of Grafton and Willes have been demolished and the Public Baths and Wash House have been built.

The houses and chapel at the bottom of Anglers Lane have been demolished and the site is shown as empty. Why? Answer – Una House was built there in 1922 after quite a long hiatus while the land laid empty and a Carnegie Library was planned. (Una as you will know .. the embodiment of truth and honour ” from Spencer’s Fairie Queen.)  Raglan Street north side is still there together with the mews and small industrial buildings which were later demolished for the building of Alpha Court and Monmouth House. 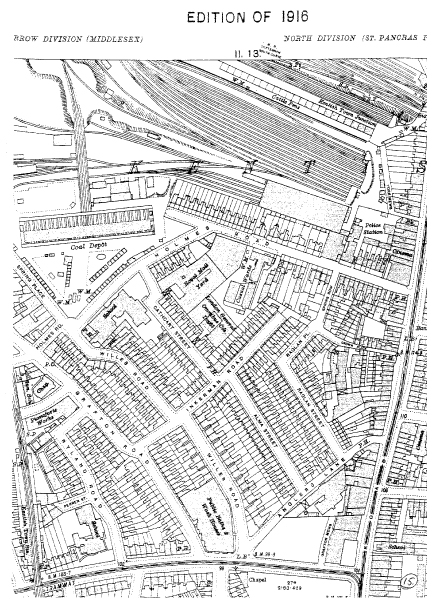