The first historic map of the area is the wonderful 1801 map. There is quite an extensive history behind this map and its companion 1804 version.

Camden History Review 7 has an article by Anthony Cooper which describes how in June 1792 the parish decided to commission a map of the parish and the work started the following year by Mr Prickett of Highgate on a quote of 50 guineas. The work was actually done by ‘Mr Thompson from Mr Prickett’ and was finished by July 1801. The work was so considerable and so satisfactory that the parish agreed to pay him an extra 100 Guineas after it was finished.

It is very large measuring ten feet by four feet and very detailed. There is a copy in the Archives and Camden History Society published a large copy in their Kentish Town Packet about 30 years ago.

There are two copies here: one to include the interesting development in Spring Place at the end of Mansfield Place – present day Holmes Road – and one to show our immediate area in greater detail.

You will see the High Street which in those days was called by different names at various places. Anglers Lane is clear, with the Fleet approaching from the North across open fields that are now Alma and Willes. What is now Grafton Road is shown here as another lane. The fields are named and the area given, presumably for taxation purposes.

The stretch of High Street near us is called Old Chapel Row which squares with the Chapel of Ease being where Claudius Asch was – ie the big block of flats in Anglers Lane backing on to The Owl Bookshop on the High Street.

The main development is Mansfield Road which is quite built up. This was probably a development by the prosperous local farmer Holmes. Spring Row comes off it where the top of Raglan Street now is.

If you compare this map with more modern maps you can see the truth of Gillian Tindall’s view that the street layout now reflects the layout of ‘the fields beneath’.

Mr Thompson, the surveyor was given permission to use the map “…permitted to make what further advantages he may think proper by publishing an engraving thereof…”. But this map was too large to be published very widely or profitably and so he made a smaller scale version, very slightly updated, in 1804. It is less clear and murkier. This had an accompanying book listing the various holdings which is called a Terrier Book. This could provide quite a lot of material for research. 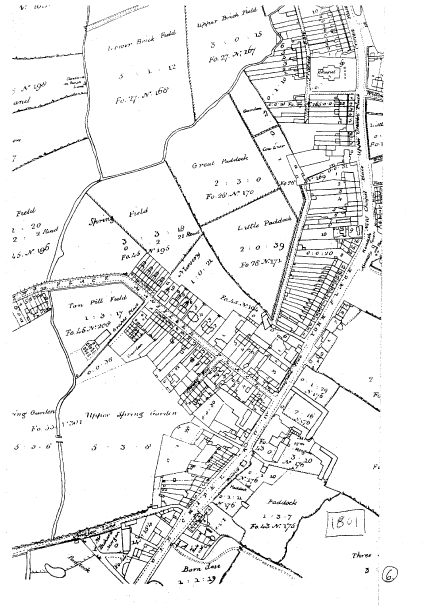 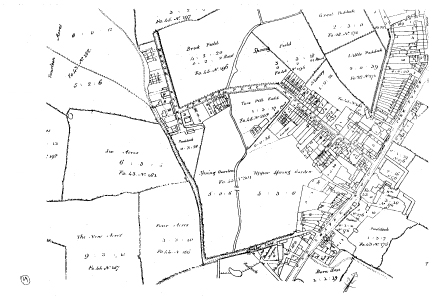